Why invest in the town of victoria park?

The Town continues to have a diversity of businesses and industries, contributing to the strength of the local economy and labour market.

Over 50% of residents are under 35 and 40% of the community were born overseas. This is reflected with busy town centres, a variety of restaurants and a blossoming street art scene.

With an aim of 19,400 more dwellings by 2050, there are significant development opportunities in established and emerging areas, including Burswood and Albany Highway.

Over 70% of Vic Park’s resident workforce has a higher education qualification. Curtin University and two South Metro TAFE campuses are located in the Town of Victoria Park. 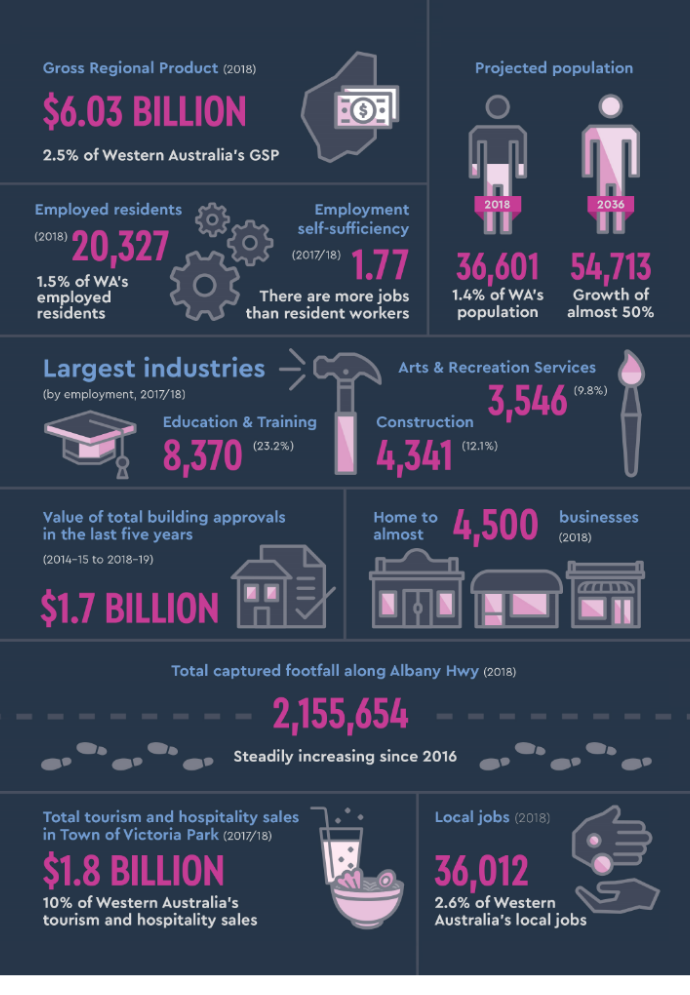 Significant development in the Town began in the post-war years, with rapid growth during the late 1950s and 1960s.

The 1980s saw the opening of several major landmarks in the Town, including Technology Park in Bentley and the Burswood Casino.

Originally famed for its car yards, the Albany Highway strip has transformed over the years, with the emergence of cafes, restaurants and bars in the area.

A culture of innovation and a distinct Vic Park vibe is propelling the Town’s transformation into one of WA’s most sought after destinations for residential, commercial and leisure pursuits.

Vic Park is evolving, with ongoing investment in major developments, such as the Burswood Peninsula, securing the Town’s reputation as WA’s premier sporting and entertainment precinct.

Committed to growth and improvement, numerous masterplans and precinct plans are also in the works, and an update to the Local Planning Strategy is underway.

The Town of Victoria Park continuously strives to achieve it’s goal to become a dynamic place for everyone.

Investment by the town

A streetscape improvement plan for an important urban corridor in Carlisle.

A transformation of an underutilised laneway into a vibrant, pedestrianised public space.